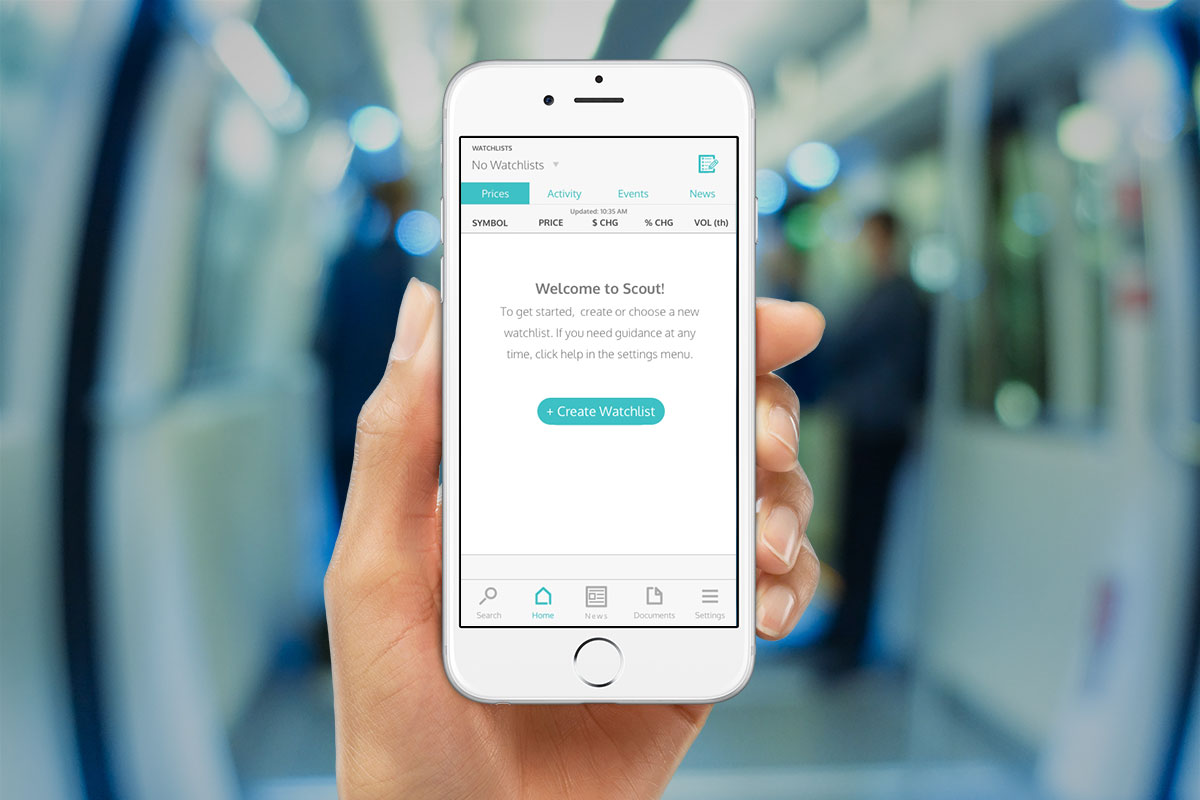 Scout Finance is a new company that provides an iPhone and iPad application to monitor stock prices, read corporate documents, access full financial statements, and stay up-to-date on the key events affecting the companies that you follow. Existing paid tools are incredibly expensive, difficult to use, and have poor mobile experiences. On the other hand, many free products are full of annoying ads, bad data, and confusing interfaces. Scout Finance offers a better way to stay informed about company's financial information with a best-in-class mobile experience.

However despite a clean UI and great data, Scout was having a problem with declining user engagement after registering in the app. Their current onboarding process has the users register for the app, login, and then presented with a default watchlist the issue was many users didn’t create their own watchlists and after playing around with the app for awhile they stopped engaging with it.

Our team worked closely with Scout’s stakeholders to identify roadblocks in the current process and identify ways to guide new users into creating their own custom watchlists, personalizing Scout Finance to each user for more engagement.

My team began with a conversation with Scout’s co-founder to identify both Scout’s business needs and understand how they coincided with their user’s needs. We were very lucky to find out that the Scout Finance team had already been interviewing users and keeping detailed records of their likes and pain-points within the app. These notes were incredibly helpful as the target audience of this app, finance professionals, are very and hard to access as research subjects. Upon further discussion we also identified “prosumers,” as secondary user base of sophisticated investors who follow the market and their investments in their spare time and not as their occupation.

With these insights we identified the following:

Despite a clean UI and great data, Scout was having a problem with declining user engagement after registering in the app. Their current onboarding process has the users register for the app, login, and then presented with a default watchlist containing Market Cap Leaders to demonstrate how the app functions. Scout then tried to nudge the user with onboarding emails to create their own custom watchlist containing the specific companies they care about. The issue was many users didn’t create their own watchlists and after playing around with the app a little they stopped engaging with it.

Since Scout Finance is a very new app, only released 2 months prior to our involvement, our challenge was to look at it with fresh eyes identify gaps in the user experience that led to decreased user engagement and increased user fall-off. 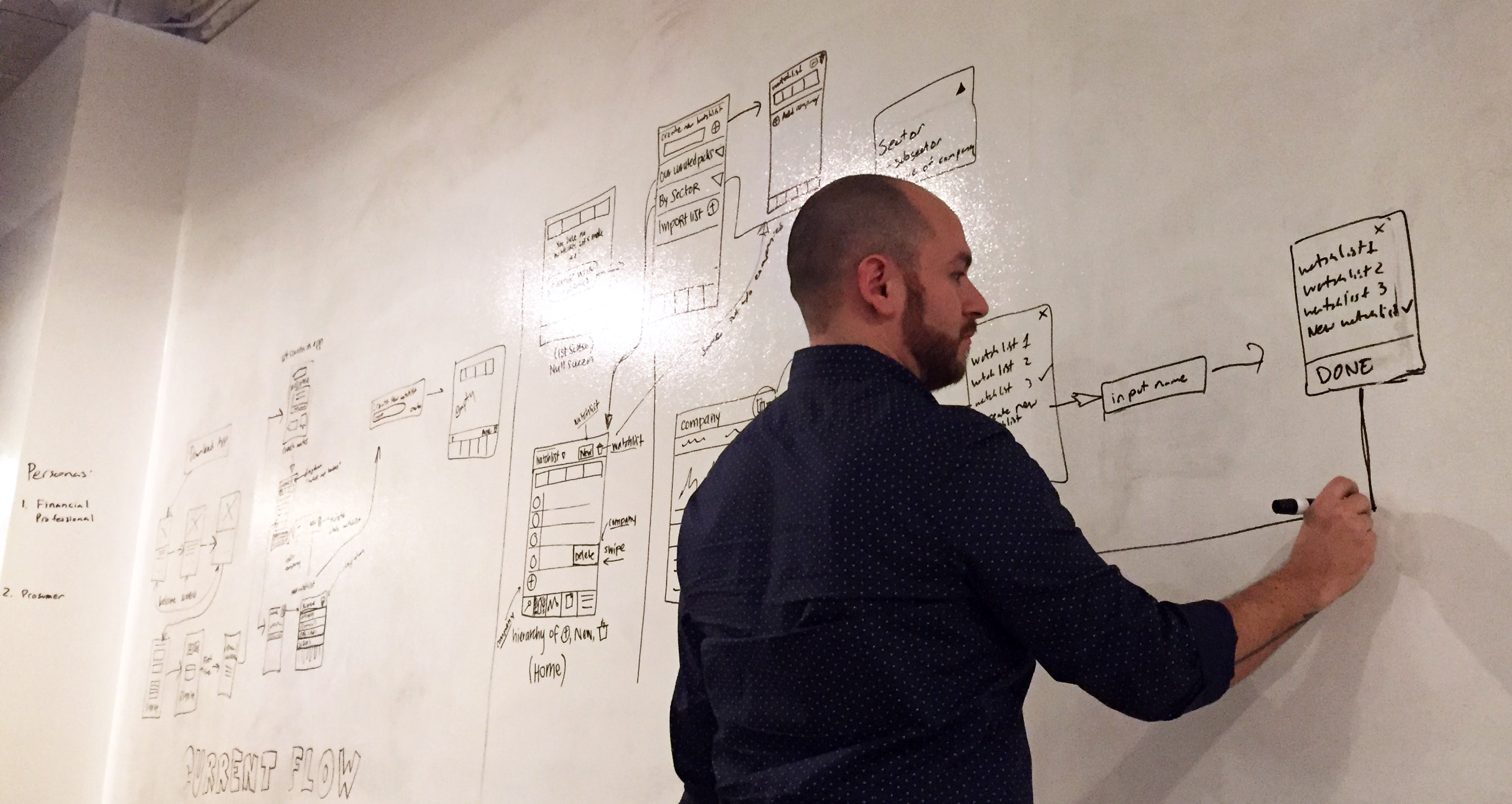 Our strategy was to make the onboarding process more customizable by guiding the user towards creating a personalized watchlist as their very first step in the app once they registered. After some user interviews we identified this lack of a personal connection made it hard for users to fully engage with the app. The was mainly because companies that they have an interest in may not be included in this pre-loaded watchlist.

Our process for this project was simple yet exhaustive. We began with an in-depth interview with the co-founder of the company to learn as much as possible about Scout’s business goals, long-term goals of the app, the background of the team behind the app, and identified user pain-points. 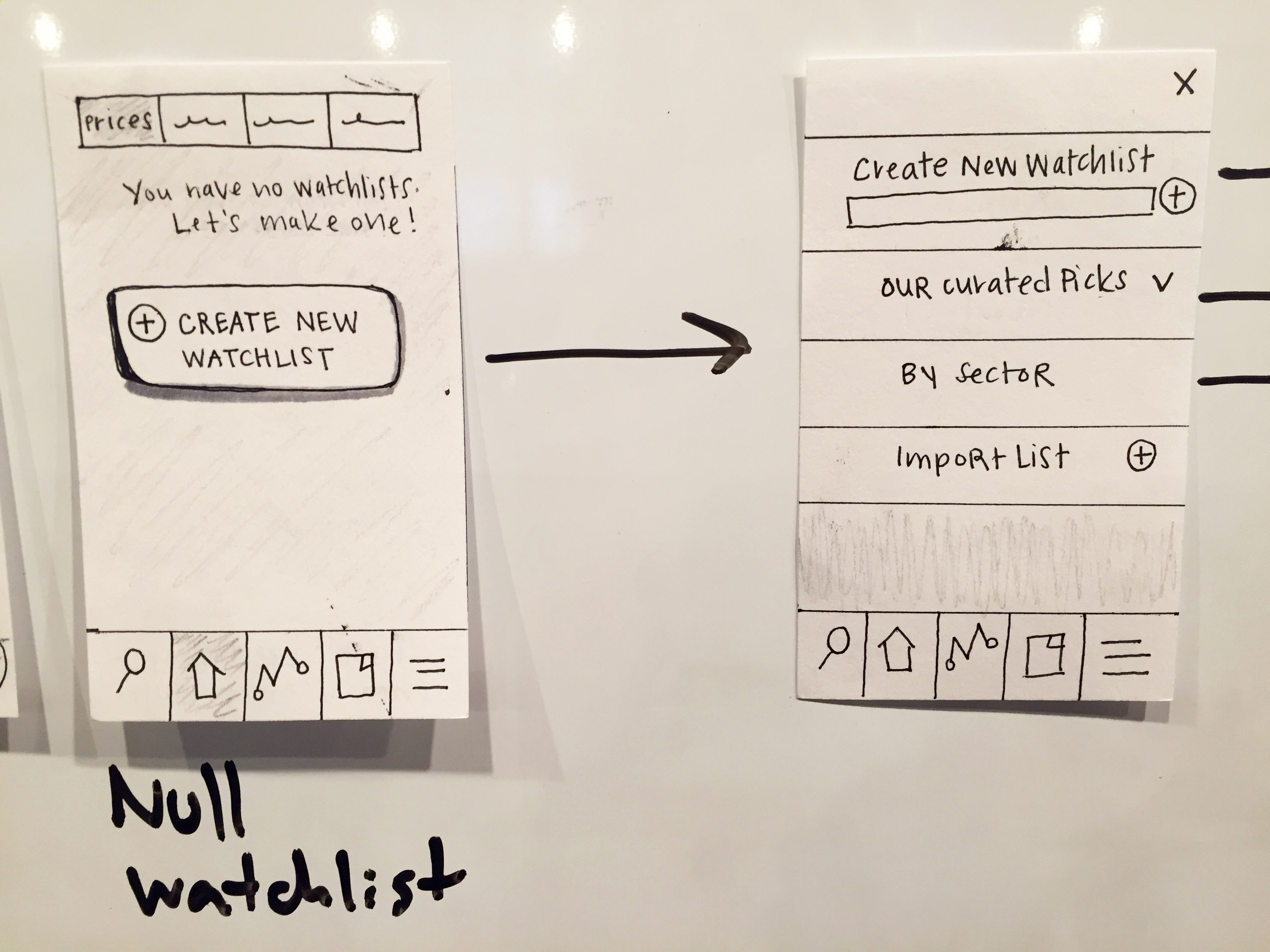 This lead to an early iteration paper prototype that allowed us to organize the user flow and account for all edge cases, something that was very important to our stakeholders. After thorough revisions based on stakeholder and user feedback, we began the ideation phase again. This cycle repeated until as a team, we decided we had reached a solution that satisfied both user needs and stakeholder requirements.

In addition to the watchlist creation issue we also identified some inconsistencies within the UI that users identified as confusing. These changes included buttons that weren’t very close to the areas in the app in which they were related. After sketching some out ideas and user research testing we were able to come up with the solution of keeping all elements that were used in managing watchlists to to top nav bar and move all elements of editing the watchlist contents to a sub bar below the list of companies.

After presenting our findings to the Scout Finance team they were very excited to implement the suggested edits into a future build of their app. Our design team worked really hard to identify the pain-points of the current user onboarding process and identify features that help make it easy and seamless for them to create their own watchlists.

Here’s the link to our final designs.